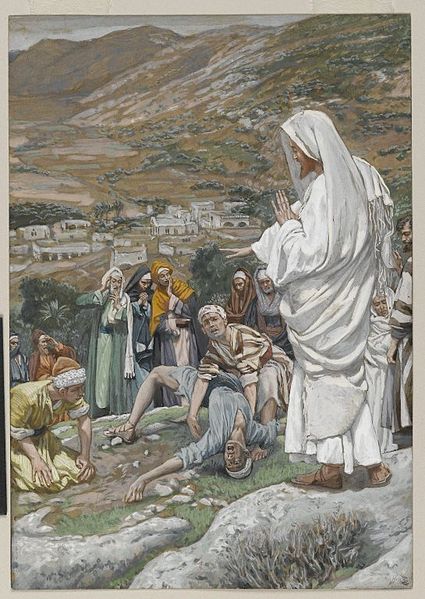 James Tissot, The Possessed Boy at the Foot of Mount Tabor (ca. 1890)

In at least three of Nabeel Qureshi’s vlogs, he spent some time commenting on the role of faith in the healings that Jesus performed. I appreciated his cautiousness on this subject. He acknowledged more than once that some people who appear to have faith are not healed, and he candidly admitted he didn’t know what to do with that fact. He agreed that it would be improper to blame a person’s lack of healing on his or her lack of faith.

On the other hand, Nabeel argued that in many instances it was the faith of those around the sick person, not necessarily the faith of that sick individual, that was instrumental in his healing. He went so far as to suggest that when Jesus was performing healings he excluded from his presence people who lacked faith or who doubted, presumably (if I understood Nabeel’s point) because their unbelief or doubt would interfere with or impede the act of obtaining the person’s healing. The healing accounts he mentioned in these comments were those of the paralytic, the deaf-mute man, Jairus’s daughter, and the demonized boy (##15, 29, and 32).

Before looking at individual texts, I think it would be helpful to distinguish three categories of miraculous works: healings, exorcisms, and resurrections from the dead. In both exorcisms and resurrections, the affected individual cannot ask for help and cannot have faith. In all of the Gospel accounts, the demon-possessed person has no control over his or her faculties and if anything, due to the demon, is frightened of Jesus. Dead people cannot believe and cannot request help, obviously. This leaves the matter of healings, in which the sick, ill, or infirm person is physically capable of asking for help and is constitutionally able to believe (whatever his or her moral and spiritual condition). So in practical terms accounts of exorcisms and resurrections are not going to involve the beneficiary having faith.

I’m now going to go through a number of different New Testament passages, including some of the ones Nabeel mentioned and some he didn’t. In the next installment of this series I will discuss the remaining passages that Nabeel cited.

In regard to the account of the demon-possessed or demonized boy (Matt. 17:14-20; Mark 9:14-29; Luke 9:37-42), Nabeel made the point that the disciples failed to cast out the demon because they didn’t have adequate faith. That’s only partially correct. We should note that the disciples were clearly surprised that the demon didn’t come out when they tried, which tells us that they had successfully cast out demons previously. Evidently they were dealing with a particularly hard case.

When the disciples asked Jesus why they were unable to cast out the demon, according to Matthew Jesus told them that it was because of their “little faith” (Matt. 17:20) whereas in Mark Jesus replied, “This kind cannot be driven out by anything but prayer” (Mark 9:29). I take these comments by Jesus to mean that the disciples had tried to cast out the demon on their own, as it were, as though the power was in them rather than in God. Their error, if I’m correct, is that they were acting on what we could call “autopilot” and neglected to approach God humbly in prayer to express their dependence on his power to drive out the demon.

When Jesus spoke with the boy’s father they had the following famous exchange (Mark 9:22-24, my translation):

The father: “But if you can, have pity on us and help us.”
Jesus: “‘If you can’! All things can be for one who believes.”
The father: “I believe; help my unbelief!”

I think it would be a mistake for us to understand this passage to mean that the boy’s father had to reach a certain level or quality of faith before his son could be exorcised. The father played no role in casting out the demon except for bringing the matter first to the disciples and then to Jesus. The father’s admittedly imperfect faith was apparently enough for Jesus to be willing to act to meet his boy’s need.

Elsewhere in the Gospels, Jesus does not expect anyone to have perfect faith, nor to have total confidence that he will perform the desired miracle. He only seems to expect them to come to him with the belief that he could grant their request. We have already commented on the example of Martha’s statement to Jesus, “But even now I know that whatever you ask of God, God will give you” (John 11:22). As noted earlier, Jesus healed a leper who asked Jesus to heal him if he was “willing,” to which Jesus responded by affirming that he was indeed willing (Matt. 8:2-3; Mark 1:40-41). The leper did not need to believe that Jesus would heal him, only that he could if he chose. Another example is the healing of the two blind men reported in Matthew:

The Gospels report Jesus praising the faith of two individuals, both of whom happened to be Gentiles. Neither one of these individuals was sure that Jesus would heal their child until after Jesus had agreed to do so.

The first of these individuals was a Roman centurion who asked Jesus to heal his boy, possibly a son but perhaps more likely a youth who served the centurion (Matt. 8:1-13; Luke 7:1-10). The centurion sent Jewish elders to Jesus to ask him to come heal the boy, and Jesus went with them to do so. Only when the centurion realized that Jesus was actually coming to the house and was nearly there did the centurion send word to Jesus not to trouble himself by entering the house (Luke 7:1-8 and Matthew 8:5-9 gives a more compressed account of the same events). The centurion understood that if he entered his house Jesus would be considered ritually unclean. He told Jesus that he was confident that if Jesus simply said the word his boy would be healed (Matt. 8:8-9; Luke 7:7-8).

The centurion’s readiness to accept that Jesus could heal his boy without actually being physically present was a remarkable expression of faith in Jesus, so much so that Jesus said that he had not found such faith with anyone in Israel (Matt. 8:10; Luke 7:9). Yet the centurion did not know that Jesus would heal his boy at first. He evidently became confident that he would do so when he learned that Jesus had agreed and was nearly at the house. According to Matthew, Jesus told the centurion, “Let it be done for you as you have believed” (Matt. 8:12 ESV). The centurion’s confidence in Jesus’ ability, not certainty ahead of time that Jesus was willing to do a miracle for him, was the faith that Jesus considered so remarkable.

The other individual was a woman whom Matthew identifies as a Canaanite and Mark as a Syrophoenician, living in the district of Tyre and Sidon with a demon-possessed daughter (Matt. 15:21-28; Mark 7:24-30). The woman begged Jesus to cast the demon out of her daughter and the two of them had a spirited exchange in which the woman was not dissuaded by Jesus’ seeming reluctance. According to Matthew, Jesus responded to her humble yet persistent plea by saying, “O woman! Great is your faith!” (Matt. 15:28; cf. Mark 7:29). Here again, the mother had no certainty that Jesus would heal her daughter, only that he could.

A miracle account Nabeel cited more than once in support of the importance of the faith of those around the sick is Mark’s account of Jesus healing a deaf man (Mark 7:31-37). He is sometimes called a deaf-mute, but he wasn’t completely mute since we are told that he had a speech impediment that kept him from speaking clearly (Mark 7:32, 35). Nabeel made the observation that the deaf man didn’t show any faith of his own and that he was brought to Jesus by others. Of course, the man couldn’t speak clearly and couldn’t hear people talk about Jesus (and sign language had not yet been invented). As for the people who took him to Jesus, Mark tells us that “they begged him to lay his hand on him” (Mark 7:32). The act of begging indicates that they believed that Jesus could heal the man but that they did not know if he would do so or not (presumably they had high hopes that he would, based on the reports of his other miracles).

I’m afraid that a lot of people have had their faith damaged by being taught that they could be healed if only they had “enough faith,” meaning if they believed with absolute certainty that they would in fact be healed. Naturally, people who accept this idea as what Christianity teaches but are not healed in this way are going to conclude that there is something wrong with their faith, or worse still that there is something wrong with Christianity. But the idea is false. Not one person in the Bible ever obtains healing from God for himself by exhibiting “faith” of this kind.

8 Responses to Faith and Healing in Jesus’ Ministry: Nabeel Qureshi and Healing, Part 8