Are You Smarter than a Trinitarian? Part One: Responding to Mormon Misdirection on the Trinity 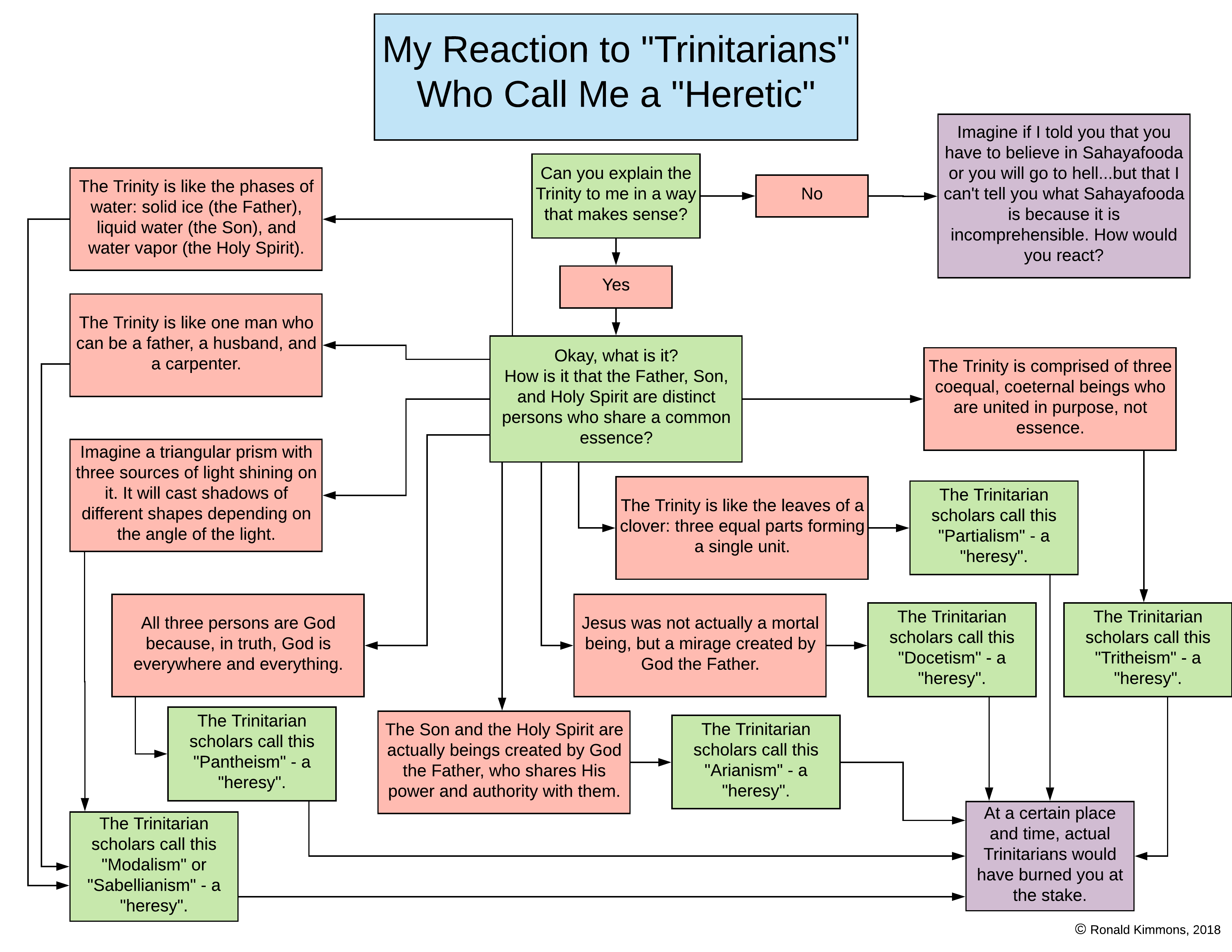 Ronald Kimmons is a Latter-day Saint businessman with political ambitions, a self-described “digital marketing professional, linguist, and smartypants” who has also spent a lot of time answering questions on the popular Q&A website Quora. According to his Quora profile, Kimmons, who attended Brigham Young University, has answered over 6,000 questions, mostly about religion, Christianity, and the LDS Church.

Earlier this year, Kimmons created a flow chart entitled “My Reaction to ‘Trinitarians’ Who Call me a ‘Heretic’.” For the purposes of critical review, I have posted an image of this flow chart here. Kimmons has posted it on Quora at least four times in the past three months. The image of this flow chart is now making the rounds on other social media sites; I have seen it twice in the past week on Facebook. Kimmons also created a quiz on his Quora page entitled “Are You Actually a Trinitarian?” with six questions. Both the flow chart and the quiz are designed to show that Trinitarians have no coherent grounds for charging others with heresy. Kimmons seeks to expose most self-professed Trinitarian Christians as “heretics” by their own standard, supposedly by showing that their own explanations of the doctrine of the Trinity are actually theories that have been condemned in church history as heresies (modalism, Arianism, etc.). By the way, I took his “quiz” and at the end it proclaimed that I was a true Trinitarian (and stating that only 21% of those taking the quiz qualify as such). However, based on Kimmons’s flow chart, his quiz should have classified me as a heretic. More on that inconsistency in part 2. In this article, I will analyze Kimmons’s argument and respond to two red herrings or diversionary claims he makes in his chart.

The Argument of the Anti-Trinitarian Chart

The flow chart is structured so as to show any Trinitarian that his position is either meaningless or heretical by Trinitarians’ own standard. The chart begins with a question:

Can you explain the Trinity to me in a way that makes sense?

You are allowed to answer either “Yes” or “No.” If you answer “No,” the chart announces the following outcome:

Imagine if I told you that you have to believe in Sahayafooda or you will go to hell…but that I can’t tell you what Sahayadafooda is because it is incomprehensible. How would you react?

If you answer “Yes,” that is, you can explain the Trinity to him in a way that makes sense, a follow-up question comes next:

Okay, what is it? How is it that the Father, Son, and Holy Spirit are distinct persons who share a common essence?

Kimmons then gives the Trinitarian eight answers from which to choose. Each of these answers is followed with the news that “Trinitarian scholars call this…a heresy,” with six different specific heresies named. These are the core elements of Kimmons’s argument, which will be addressed in part 2 of this article. From the claim that every Trinitarian explanation of the doctrine is itself heretical according to Trinitarian scholars, the following outcome is announced:

At a certain place and time, actual Trinitarians would have burned you at the stake.

Red Herrings in the Polemic against the Trinity

Kimmons confuses the issue here by including two red herrings, or diversionary issues, within his flow chart on explanations of the Trinity: the issue of whether non-Trinitarians are consigned to Hell and the issue of non-Trinitarians being burned at the stake or otherwise executed for their heretical opinions. Neither of these issues has anything to do with what the doctrine of the Trinity means or whether doctrines opposed to Trinitarianism are rightly regarded as heretical. Let’s take these side issues one at a time.

I think we can dispense with the “burning at the stake” issue rather easily. I do not know a single Christian of any denomination or theological tradition who thinks burning heretics at the stake was a good idea. False teachers should be excommunicated from the church, not executed by the state. That practice was a serious error based on wrong thinking about the role of the state and civil laws in matters of theology. It is not the job of the government to punish people who teach false doctrine. This abuse of power was the result of a false idea about the role of government, not the doctrine of the Trinity. It is impossible to show any logical connection between the premise “The Father, Son, and Holy Spirit are three persons in one God” and the conclusion “We should burn at the stake anyone who disagrees with this doctrine.” So let’s just ignore that particular red herring.

Trinitarianism also does not commit one to the belief that rejection of the doctrine of the Trinity will result in one being consigned to Hell. There is nothing inherent in Trinitarian theology that would indicate or imply that someone who rejects that theology is necessarily bound for eternal punishment. The issue of who is going to be saved and who is not is a different issue than how to understand the divine nature and the distinction of the three persons.

As I have often said, we are not required to get a passing grade on a theology exam, let alone required to ace such an exam, in order to be saved. Anti-Trinitarians sometimes characterize Trinitarian Christians as thinking, in effect, that if you got a 99 on your theology exam but got the question on the Trinity wrong, God would angrily dispatch you to the lake of fire. Honestly, in my more than forty years as an evangelical, Trinitarian Christian, I have never met a single person who held such a view.

Evangelicals believe that God saves us by his grace alone, through our faith in Jesus Christ. If someone has a radically erroneous view of God or Christ, the false doctrine they are accepting may reflect a lack of genuine, authentic faith, but then the false doctrinal belief would be a symptom of a much more serious problem. Moreover, someone in this situation has far more doctrinal problems than merely disagreeing with the word “Trinity” or the specific formulations of that doctrine.

So, for example, if someone professes faith in Christ but regards him as an angelic creature who became a man to give us a second chance to prove ourselves worthy, as Jehovah’s Witnesses teach, such faith is based on an unsound foundation. Individuals who believe these false doctrines are highly unlikely to have an authentic, saving relationship with Christ because their whole conception of the Christian faith is askew. Jehovah’s Witnesses certainly think they believe in the Father, Son, and “holy spirit” (no capitals in their view), and they would happily agree that the Father and the Son are “one in purpose,” but in fact their whole theology and as a result their religious outlook and practice radically departs from biblical Christianity.

Unitarians also claim to believe in the Father, Son, and Holy Spirit, and they would also agree that they are “one in purpose,” but no Mormon would consider Unitarians to have an acceptable understanding of Christianity. According to Unitarianism, Jesus did not exist before his conception and birth as a mortal and he is not Jehovah, the God of Israel, but a sinless man whom God elevated in Heaven after his resurrection. Again, the problem runs much deeper than simply denying the specific formulation of the doctrine of the Trinity.

Similarly, from an orthodox or evangelical Christian perspective the problem with the LDS religion goes far beyond its disagreement with a specifically Trinitarian formulation of the relation of the three divine persons. Mormons often seem to think that the only difference between our two theologies is that we believe the three persons are one in “essence” or being while they think the three persons are one in “purpose.” Essence or purpose—what’s the big deal? They often say that they don’t see why this is such a big difference: they agree that all three persons are one and view the three persons as members of one “Godhead.” But behind this verbal difference over how to define the “oneness” of the “Godhead” are two radically different views of the divine, the world, and the Christian life. Mormonism teaches that the three persons are three individual divine beings—“three Gods,” according to Joseph Smith—and that these individuals became Gods through a process of exaltation that is open to us. Orthodox Christians consider deity to be a closed category with only one God, existing in three distinct persons who exist eternally and inseparably as absolute deity; no one can ever “become” a God because to be God means to exist as God without beginning. The doctrine of the Trinity recognizes the Father, the Son, and the Holy Spirit as God, and denies that anyone can ever become God. These theological differences lead to very different forms of religion: in the case of the LDS religion, these ideas lead to Mormons pursuing exaltation as a path of realizing their own divine potential through the rituals and other religious obligations laid down by the LDS Church hierarchy. This whole religious and theological outlook presupposes that orthodox Christianity in all its denominational forms is part of a “great apostasy” that is ignorant of the truth about God and our own divine potential.

Thus, the problem with Mormonism from an orthodox Christian perspective goes much, much deeper than its rejection of the word Trinity or its use of different words to define the unity of the three divine persons. Underneath that rejection is an entirely different version of Christianity that plainly claims to supplant the traditional Christian faith that affirms, as part of its belief system, the doctrine of the Trinity.

Does this mean that Mormons are all going to Hell? No. We cannot make such broad, sweeping generalizations about the members of any religious group. Nor do we think that all members of orthodox or evangelical churches will enjoy eternal life in the new heavens and new earth. It is one of the distinctive beliefs of evangelicals that church affiliation does not determine one’s salvation. However, affiliation with a religion that teaches a radically different understanding of the Christian faith is cause for grave concern. Such people need to hear and receive the truth about God and the Christian life. Their eternal salvation is at least in serious doubt or jeopardy if they are adherents of a false religion. Out of love for such people and loyalty to the God revealed in the Bible, Christians ought to “speak the truth in love” (see Eph. 4:15) to Mormons out of concern for their eternal welfare. Doing so does not mean we think we are better than Mormons because we get a higher score on a theology exam.

6 Responses to Are You Smarter than a Trinitarian? Part One: Responding to Mormon Misdirection on the Trinity