Francis Chan “Like God and Man All at Once”? 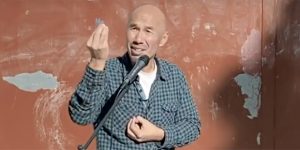 Francis Chan has been one of the most popular American evangelical figures of the past decade. He is the author of several influential books, was the pastor of a megachurch in Southern California, and has been featured in all sorts of evangelical media and at major conferences (including some controversial ones). Early this year he moved to Hong Kong, where he has been doing videos that hundreds of thousands of people watch on YouTube. In one of these, dated May 2, 2020, Chan made the following statement (starting about minute 4:00):

Jesus did not die on the cross so that you and I could live ordinary lives. He died so that my soul could be cleansed, so that my body could become completely clean, so that his Holy Spirit would enter into me. And just like I wouldn’t dare ever refer to Jesus as ‘just an ordinary guy,’ none of us would. Are you kidding me? He was a man and, somehow, he was God all at once. You can’t call him ordinary. But don’t you understand? That’s what he’s saying about us now! Like right now you’re looking at a person who is not just a person. Somehow God is in me and there is a sense in which I am like God and man all at once! His Spirit dwells inside of me. It makes no sense then if my life resembles a person who does not have the Holy Spirit in them.

A Lutheran pastor named Chris Rosebrough did a video criticizing Chan’s message. He introduced his critique video as follows: “Here is Francis Chan saying that he’s both God and man. Yes he actually says that.”

Well, to be precise, Chan said that there was a sense in which he was “like God and man all at once.” In context it was difficult to tell if like meant “similar to” or if it meant, like, Southern California surfer dude like. If the latter, which is possible (Chan did seem to say “like” fairly often), then Rosebrough is right. Even if Chan meant “similar to,” what Chan says does appear to cross the line. Note that he makes this statement after referring to Jesus as man and God and then saying, “That’s what he’s saying about us now!” On no reasonable construction of Chan’s statements in context is this true. God is certainly not saying about us the same thing that is true about Jesus being both God and man.

I don’t know if Chan has made similar statements in the past. My guess is that the context of this statement may be a move in the direction of Catholicism or Eastern Orthodoxy. At the beginning of the year, another video appeared on YouTube in which Chan expressed a newfound belief that the bread and wine in Communion become “the literal body and blood of Christ.” It is possible that in saying that he was “like God and man all at once,” Chan was attempting to express the concept of theosis or deification, a theological idea associated especially with the Orthodox Church. If so, though, he did not express it very well.

Perhaps at some point Chan will become aware that his statement appears highly problematic theologically and will offer a clarification or retraction. In any case, evangelicals have reason to be concerned about the direction Chan’s teaching seems to be headed.

Visit the Website
This entry was posted in Jesus and Christology and tagged Catholicism, Francis Chan, Incarnation, Orthodox Church, theosis. Bookmark the permalink.

2 Responses to Francis Chan “Like God and Man All at Once”?