Make a Resolution to Love Your Enemies This Year: 10 Principles from the Sermon on the Mount 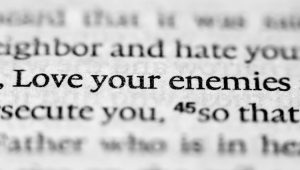 One of the unfortunate developments of 2020 in America and no doubt many other parts of the world was the exacerbation of divisions between people over political, cultural, and religious differences. The political divide between the left and the right in the United States has become a wide chasm, with some (not all) voices on both sides openly expressing hatred for the other. Jesus’ instruction in this matter is just as challenging today as ever:

“You have heard that it was said, ‘You shall love your neighbor and hate your enemy.’ But I say to you, Love your enemies…” (Matt. 5:43-44a; biblical quotations taken from the ESV).

There was a great article in the satirical Babylon Bee back in 2017 entitled, “Scholars: ‘Love Your Enemies’ Does Not Include People You Disagree with Politically.” The point, of course, was that it certainly does include such people—if you even consider them enemies. But how do we love our enemies without compromising our values or capitulating to evil? As it turns out, Jesus has a lot to say in answer to this question in the Sermon on the Mount. Here are ten principles from Matthew 5–7 regarding how we should love our enemies. To make these somewhat easier to remember, each one begins with the same two letters as the word principles.

“Blessed are the peacemakers, for they shall be called sons of God” (Matt. 5:9).

For most of us, it is inevitable that we will have some enemies in this life. However, it should be our aim to reduce enmity between ourselves and others to the extent that we can faithfully do so. As Paul put it, “If possible, so far as it depends on you, live peaceably with all” (Rom. 12:18). (As many biblical scholars have demonstrated, Paul shows in Romans 12:9-21 that he was familiar with Jesus’ teachings that we know especially from the Sermon on the Mount. Several of the principles discussed here could be supported from that passage in Romans.) One of the marks of a Christian disciple according to this text is a principled pursuit of peace with others. In order for us to do this, by the way, we will need to seek out opportunities to converse with those who at present are our enemies in order to seek mutual understanding and more amicable relations.

“Blessed are you when others revile you and persecute you and utter all kinds of evil against you falsely on my account” (Matt. 5:11).

If we are going to have enemies, as much as possible, let it be because we are uncompromising in our stand for Jesus Christ. This does not mean that we will not have our views on political, social, or cultural issues. We cannot avoid such issues, nor do I think we should try. I also realize that some people will hate you because of your political views, no matter how humbly you express them. Nevertheless, Christians should be known primarily for their allegiance to Christ, not primarily for their political affiliation. We should make it as clear as we can that any affiliation or association that we have with a nation or a political party is conditional. Our ultimate loyalty is to God (Acts 5:29).

“You are the light of the world. A city set on a hill cannot be hidden. Nor do people light a lamp and put it under a basket, but on a stand, and it gives light to all in the house. In the same way, let your light shine before others, so that they may see your good works and give glory to your Father who is in heaven” (Matt. 5:14-16).

The basic principle here is that we should not add fuel to the fire of hate, discord, and division, but instead should seek to shine the light of truth, life, and love in the world. We will do so mainly by the way we live, though also by what we say (and the way that we say it). Again, I’m not suggesting we should be naïve about the irrational way in which some people react to Christians expressing their faith in word and deed. The point is that we should show the world by the way we live what our principles really mean and why they are good.

Most famously, Jesus told his disciples to express love for their enemies by praying for them. Please note, he said we were to pray for them, not against them! This does not mean, of course, praying that those who persecute Christians will succeed in their opposition to us. I think there are three ways in which we can and should pray for our enemies. (a) Pray for their ultimate good: that they would repent and turn to Christ in faith. (b) Pray for their civic good: that they would adopt or support policies more beneficial for all, including (but not limited to) Christians (see 1 Tim. 2:1-4). (c) Pray for their common good: that God through his providential care for his world would display his goodness even to those who hate us. This leads to the next point, drawn from the very next words of Jesus.

“…so that you may be sons of your Father who is in heaven. For he makes his sun rise on the evil and on the good, and sends rain on the just and on the unjust” (Matt. 5:45).

There is no room for “cancel culture” in the values of the Christian faith. God does good that blesses evil people along with good people, and as his children we should do likewise. This does not mean we actively seek to empower those who do evil. In a country such as the United States in which the political powers are supposed to be chosen and held accountable by the people, the people have not just the right but the responsibility to do what they legally and morally can to empower those who do good and to limit the power of those who do evil. (This includes, of course, passing and enforcing constitutionally appropriate laws in order to limit evil that affects the community.) On the other hand, this does not mean engaging in efforts to destroy people’s lives for the sake of our “cause.” We should sincerely want to improve conditions for all people, not just for ourselves or for those “on our side.” Our efforts should be aimed at making life better for people of all religions (and of none), for people of all ethnicities or colors, for those in rural areas and those in the cities, for those in “blue states” and those in “red states,” and so on. To the extent that we can, we should resist the tendency to divide people into “us” and “them.”

“But seek first the kingdom of God and his righteousness, and all these things will be added to you” (Matt. 6:33).

Our highest priority as believers in Jesus Christ is to be the advancement of his kingdom. Our cultural and political concerns may be real, but our security should be in our relationship with God, not in our material comfort or cultural influence. In practical terms, this means that we go about our daily lives confident in God’s presence and purpose even when the world, or a large part of it, is against us. Our enemies may seem big, but if we are kingdom people, our Friend is bigger. This perspective will give us the quiet assurance to love our enemies because we know that they cannot stop what is most important to us.

Before we criticize those whom we perceive as our enemies, we should take a close look at our own values, beliefs, attitudes, and actions. Our “enemies” will likely be only too glad to help us! When we are criticized, before we react we should consider whether our critics might be right, or partially right, about us. Maybe we do have a speck, or even a log, in our own eye. Let’s just make sure that when people attribute evil to us, that they are doing so falsely (Matt. 5:11).

“So whatever you wish that others would do to you, do also to them, for this is the Law and the Prophets” (Matt. 7:12).

There are actually quite a number of principled applications one could derive from the Golden Rule, perhaps Jesus’ most famous saying. One such application is that when our enemies, or more broadly those whose views we oppose, get something right, we should acknowledge and even praise them for it. After all, we would greatly appreciate it if they did that for us, wouldn’t we? There are almost always some people on “the other side” from us religiously or politically who make some good points, or who do some good things. Very, very few human beings are monsters. Most are flawed people, sinners, who are right about some things and wrong about other things. Those whom we oppose are often more like us than we realize or might care to admit. Tactically, if we give credit where credit is due to those with whom we usually strongly disagree, such graciousness can help facilitate better understanding from them of our point of view and even lead eventually to some people coming over to our perspective. Even if they don’t, it’s still the right thing to do.

“Beware of false prophets, who come to you in sheep’s clothing but inwardly are ravenous wolves. You will recognize them by their fruits. Are grapes gathered from thornbushes, or figs from thistles? So, every healthy tree bears good fruit, but the diseased tree bears bad fruit. A healthy tree cannot bear bad fruit, nor can a diseased tree bear good fruit. Every tree that does not bear good fruit is cut down and thrown into the fire. Thus you will recognize them by their fruits” (Matt. 7:15-20).

We do not help those who are in serious error by ignoring or glossing over the problem. Moreover, we have a responsibility to others who might be influenced by lies, errors, or bad examples to speak up and show what the truth is. It is not unloving to expose false prophets. Those who follow them need to hear the truth about those “wolves in sheep’s clothing.” Again, there is a right way to do this and also a wrong way. Our strong denunciations should be directed against the wolves, not against the wayward sheep that follow them. Even our denunciations of the false prophets need to be truth communicated in love (see Eph. 4:15). We should avoid coming across as hostile toward the members of a false religion or against those who espouse a political or cultural position that we consider grievously wrong. “Let your speech always be gracious, seasoned with salt, so that you may know how you ought to answer each person” (Col. 4:6). Christians should be voices of reason in the face of irrationality, conviction in the face of compromise, and love in the face of hate.

We will do no one any good, whether they are our (perceived or real) enemies or anyone else, if we loudly claim that we are Christians but live in a way that brings reproach on the name of Christ. We should not hear Jesus’ warning here as exhaustive of all the ways that false disciples claim to be able to prove that they are his followers while actually being his enemies. For example, “Did we not believe the right doctrines in your name?” will not avail in the Day of Judgment—a sober truth that I would insist we recognize without detracting at all from the importance of sound doctrine. We will do more to defeat Christ’s enemies by living out what we profess, by building our lives on his word (Matt. 7:24-27), than by anything else.

Visit the Website
This entry was posted in Biblical Studies, Politics and tagged Matthew 5-7, Sermon on the Mount. Bookmark the permalink.