Joseph Smith and the Many Wives of David and Solomon: Authorized or Abominable? 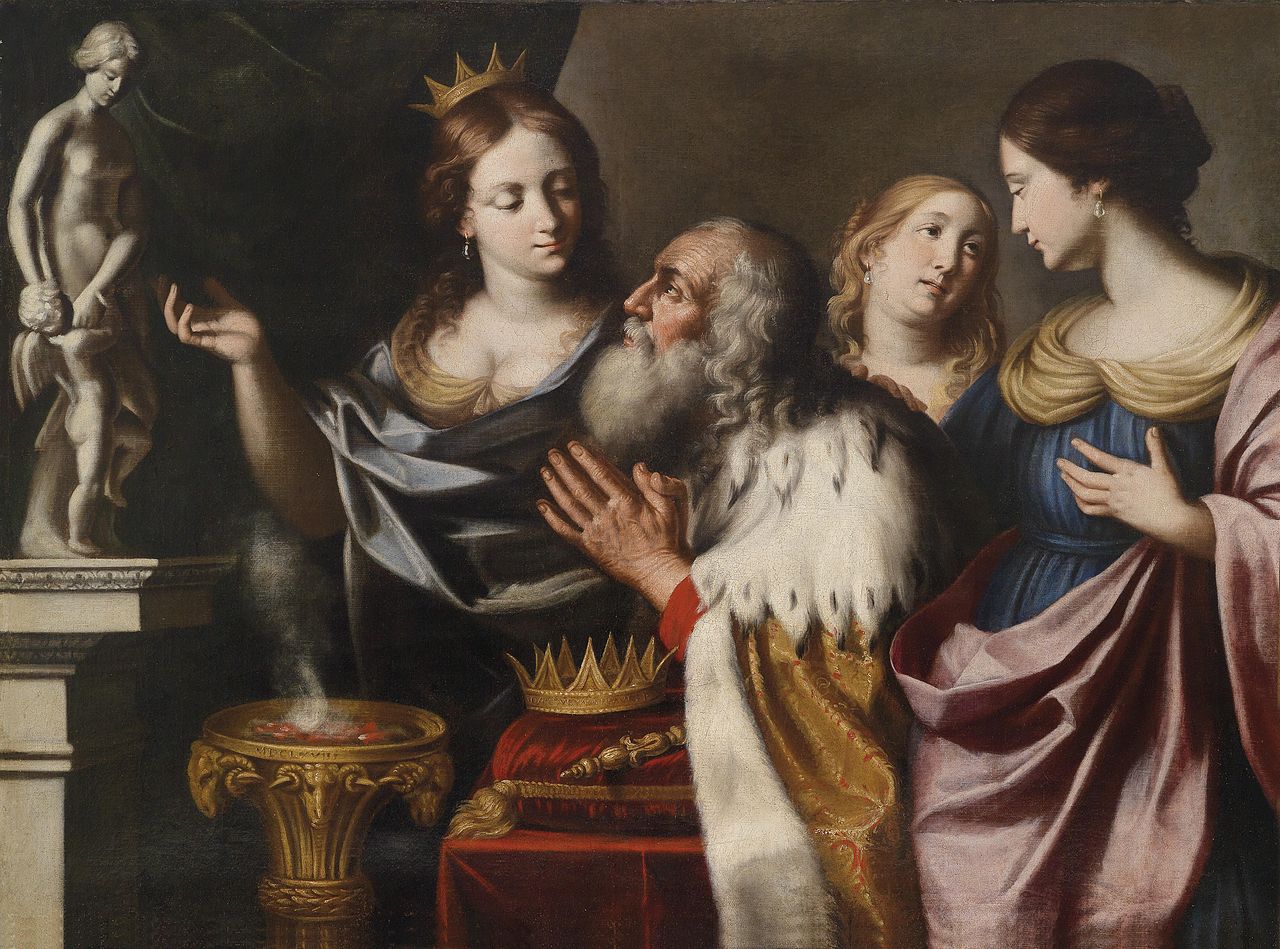 In all of the debate over Joseph Smith’s teachings and practices regarding polygamy, little attention seems to have been given to an explicit contradiction in his scriptural revelations. This contradiction concerns what the Lord thought of David and Solomon having many wives. These statements appear in the Book of Mormon and in the Doctrine & Covenants, two of the scriptural volumes considered “standard works” in the LDS Church. I quote the two passages with sufficient context to allay any concerns that the contradictory statements are being taken out of context.

2:23 But the word of God burthens me because of your grosser crimes. For behold, thus saith the Lord: This People begins to wax in iniquity; they understand not the Scriptures: for they seek to excuse themselves in committing whoredoms, because of the things which are written concerning David, and Solomon his Son. 2:24 Behold, David and Solomon truly had many wives and concubines, which thing was abominable before me, saith the Lord. 2:25 Wherefore, thus saith the Lord: I have led this people forth out of the land of Jerusalem, by the power of mine arm, that I might raise up unto me a righteous branch, from the fruit of the loins of Joseph. 2:26 Wherefore, I, the Lord God, will not suffer that this people shall do like unto them of old. 2:27 Wherefore, my brethren, hear me, and hearken to the word of the Lord: for there shall not any man among you have save it be one wife; and concubines he shall have none: 2:28 For I, the Lord God, delighteth in the chastity of women. And whoredoms is abomination before me: thus saith the Lord of Hosts. 2:29 Wherefore, this peeple shall keep my commandments, saith the Lord of Hosts, or cursed be the land for their sakes. 2:30 For if I will, saith the Lord of Hosts, raise up seed unto me, I will command my people: otherwise, they shall hearken unto these things. (Jacob 2:23-30, emphasis added)[1]

132:1 Verily, thus saith the Lord unto you my servant Joseph, that inasmuch as you have inquired of my hand to know and understand wherein I, the Lord, justified my servants Abraham, Isaac, and Jacob, as also Moses, David and Solomon, my servants, as touching the principle and doctrine of their having many wives and concubines…. 132:38 David also received many wives and concubines, and also Solomon and Moses my servants, as also many others of my servants, from the beginning of creation until this time; and in nothing did they sin save in those things which they received not of me. 132:39 David’s wives and concubines were given unto him of me, by the hand of Nathan, my servant, and others of the prophets who had the keys of this power; and in none of these things did he sin against me save in the case of Uriah and his wife; and, therefore he hath fallen from his exaltation, and received his portion; and he shall not inherit them out of the world, for I gave them unto another, saith the Lord (D&C 132:1, 38-39).

The standard Mormon perspective on these two passages is that God sometimes permits polygamy while otherwise prohibiting it. This is how Mormons typically understand Jacob 2:30. They argue that monogamy is the norm, but when God chooses, he commands some people to practice polygamy (or “plural marriage”). In my estimation, this view regarding polygamy has some problems, but for my purposes here I will not be challenging it. Assuming for the sake of argument that the Lord sometimes commands some people to practice polygamy and at other times prohibits it, there remains a direct contradiction between these two passages. That contradiction concerns whether the Lord approved specifically of David and Solomon taking many wives. The two passages could hardly be more directly contradictory on this question:

David and Solomon truly had many wives and concubines, which thing was abominable before me, saith the Lord. (Jacob 2:24)

I, the Lord, justified…David and Solomon, my servants, as touching the principle and doctrine of their having many wives and concubines. (D&C 132:1)

When we compare what the two passages say on this point, then, we find they are in direct, explicit contradiction of each other:

In a recent discussion of this matter with me on Facebook, some Mormons attempted to resolve this contradiction with several points. Let’s look at these responses.

Again, this explanation is contrary to Jacob 2:24, which states simply that David and Solomon having “many wives and concubines” was “abominable” to the Lord. Moreover, interpreting Jacob’s statement as implicitly referring to David and Solomon’s excesses or sins would severely weaken Jacob’s argument, since the Nephites could plausibly respond, “We’re not seeking the right to kill men to steal their wives, nor are we planning to marry pagan women. We just want to have more than one wife.” But Jacob is quoted as telling them in no uncertain terms that they were permitted only one wife each and no concubines at all (Jacob 2:27). Thus, it will not work in context to claim that Jacob was only condemning the excesses or specific sins that David and Solomon committed but not condemning their having “many wives and concubines.” That is explicitly what Jacob 2:24 criticizes David and Solomon for doing.

In short, there seems to be no plausible resolution to the contradiction between Jacob 2:24 and Doctrine and Covenants 132:1, 38-39. We should not stop, however, at noting the contradiction. Rather, we should ask how this contradiction arose in these texts. Joseph Smith dictated both books. He claimed that God inspired both books. The LDS Church considers both books to be scripture. The answer is to be found in the probable origins of the two texts.

Jacob 2 was supposedly written during the Old Testament era, about five centuries before Christ, when polygamy was still a fairly common practice at least for kings and other powerful men. It therefore seems at least somewhat surprising that the Book of Jacob would contain such a vehement denunciation of polygamy, something unparalleled in the Old Testament (or even in the New Testament). However, it would not be surprising at all in a text originating in a modern Anglo-American, predominantly Christian culture. Joseph Smith dictated the Book of Mormon in 1829, when he was part of that culture and still adhered to its views on such matters as monogamy. Moreover, it is typical of the Book of Mormon to contain “plainer” statements on a wide range of issues as compared to statements in the Bible—a feature Mormons tend to celebrate. Yet in this case (as in many others) the Book of Mormon’s plainness is anachronistic.

Joseph produced the text of Doctrine and Covenants 132 on July 12, 1843. By that date, Joseph had already entered into numerous clandestine polygamous unions. From 1841 through 1843 Joseph took some 33 “plural wives,” and by July 1843 most of these unions had already been formalized.[2] His one legal wife, Emma, had found out about his “plural marriages” and was very unhappy about it. Word of Joseph’s polygamy was circulating among the Mormons, naturally arousing a great deal of consternation and even opposition. In this context, Joseph produced a revelation that “justified” his polygamy by claiming that the Lord had also “justified” the polygamy of various Old Testament figures, including David and Solomon (D&C 132:1). Toward the end of this rather lengthy revelation, Joseph quotes the Lord admonishing Emma (referring to her by name three times) to accept Joseph’s plural wives (132:51-56).

Now we can understand how the contradiction arose. In 1829, Joseph was a monogamist. In 1843, he was a secret polygamist, under fire from his wife and from some members of his own church for engaging in that practice. This change in Joseph Smith’s lifestyle very simply accounts for the difference between the two texts. This means that the contradiction cannot legitimately be waived aside as simply a “mistake,” as though we were criticizing the LDS scriptures for failing to be inerrant. Rather, the contradiction is evidence for the uninspired, all too human origin of these supposedly inspired texts. It shows that in both texts it was Joseph Smith, not the Lord, and not a true prophet of the Lord, who was speaking.

[2] I am excluding Fanny Alger, a maid with whom Joseph had an affair in the early 1830s. See Robert M. Bowman Jr., “Joseph Smith and Fanny Alger” (2014), online at http://mit.irr.org/joseph-smith-and-fanny-alger. For 1841 as the date of Joseph’s first plural marriage in Nauvoo, see Brian C. Hales, Joseph Smith’s Polygamy, 3 vols. (Salt Lake City: Greg Kofford Books, 2013), 1:58–67. There is some debate about the exact number of plural wives, but all scholars agree it was over 30.

1 Response to Joseph Smith and the Many Wives of David and Solomon: Authorized or Abominable?