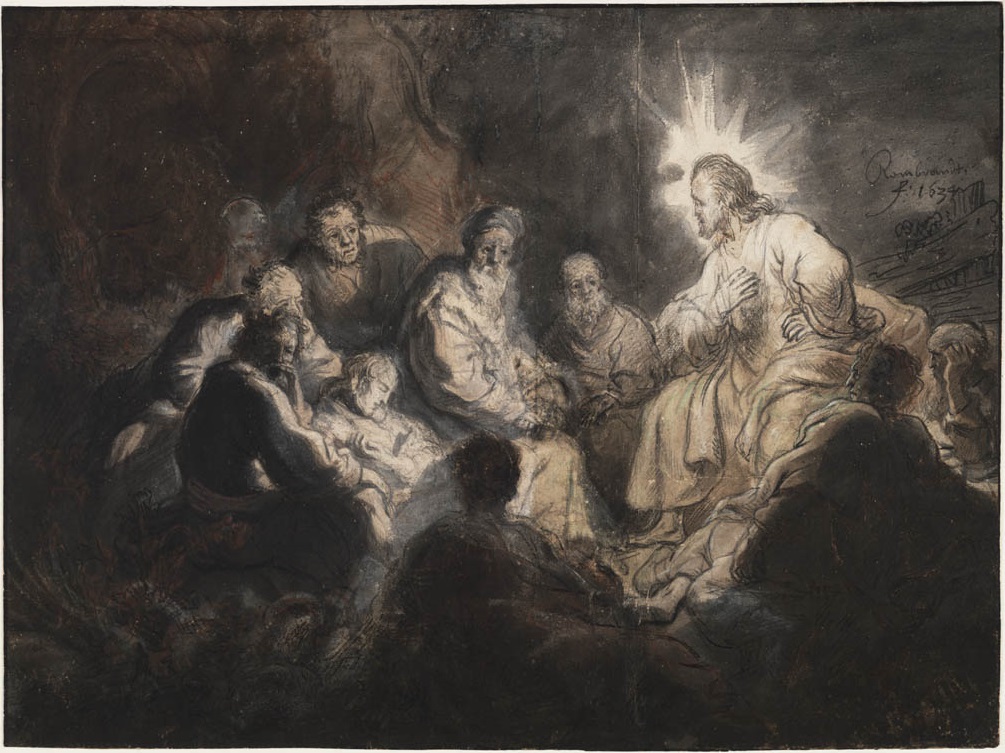 Rembrandt, Jesus and his Disciples (1633)

A key argument in Nabeel Qureshi’s vlogs about healing is that not only did Jesus heal people but so did his disciples. The argument can be stated formally as follows:

In vlog #32 Nabeel made this argument explicit. However, I think he also acknowledged a glitch in the argument when he affirmed that we are also Jesus’ disciples but then added, “in a certain way.” The problem is that the argument equivocates in its use of the term disciples.

Note that the apostles were not limited to twelve men, although the twelve were the core group of apostles. In addition to the twelve, the NT identifies as apostles Barnabas (Acts 14:14; 1 Cor. 9:5-6; cf. Gal. 2:8-9), Paul (Acts 14:14; Rom. 1:1; etc.), James the Lord’s brother (1 Cor. 15:7; Gal. 1:19; 2:9; cf. James 1:1), and possibly Andronicus and Junias/Junia (Rom. 16:7). Thus, the total number of apostles of Christ seems to have been no less than fifteen and possibly seventeen (that we know by name). In the upper room after Jesus’ ascension and before Pentecost, Judas’s replacement was chosen from a pool of up to 120 persons present at the time, and Paul refers to a group of some 500 individuals who were witnesses of the risen Christ, any of whom potentially could have been given apostolic commissions (1 Cor. 15:6).

Although Stephen is not explicitly called a prophet, I would definitely count him as a prophet. Acts tells us six things about him that support this conclusion:

No one of these features of Stephen’s ministry would prove that he was a prophet, but their combination in one man makes it difficult to deny. But if this is correct, then the fact that “great wonders and signs” were performed through him is not an exception to the rule that such consistent or repeated performance of miracles was authentication of his status as an authoritative spokesperson for Jesus Christ.

Another figure from the early church who may have been a prophet was Ananias, the “disciple” who laid hands on Saul of Tarsus (Paul) to restore his sight and who baptized him. Ananias was rather clearly not an apostle and (as with Stephen) we are not told that he was a prophet. It is possible that Ananias was also a prophet: he received a direct, verbal revelation from the Lord Jesus to go to the house of a man he did not know—even receiving directions to the house—in order to lay hands on Saul (Acts 9:10-11). The act of laying hands on someone everywhere else in Acts is performed by apostles or prophets (Acts 5:12; 6:6; 8:17-18; 13:3; 14:3; 19:6, 11; 28:8). These two points (that Ananias received a direct verbal revelation and that he laid hands on Saul) don’t prove that he was a prophet; the case for identifying him as one is weaker than for Stephen. Still, he might have been one. On the other hand, the healing of Saul of Tarsus at the hands of Ananias might be an exception to the generalization I made that the NT does not report miraculous healings except those done by Jesus or through an apostle or prophet.

Having acknowledged this possible exception, I would point out that it is indeed rather exceptional. It does nothing to support the claim that anyone can perform or receive miraculous healings by faith. As I have pointed out, Ananias received a direct, verbal revelation from the Lord Jesus to go to the house of a man he did not know (Acts 9:10-11a), to lay hands on another man he knew only by reputation as a persecutor of Christians (9:11b-14). The healing was given to reverse the blindness that had come upon Saul as the result of his experience of seeing the risen Jesus. The person healed was himself about to become an apostle. This is not a case of just any Christian praying for any other Christian’s healing.

Miracles Performed by the Apostles and the 72 Disciples

In the Gospels, the ability to perform miracles is presented as a special dispensation or endowment given to persons whom Jesus appointed to proclaim the kingdom of God as his spokespersons, not as an ability possessed by all believers in Jesus. This point is clearly made when Jesus called the twelve apostles and the larger group of the 70 or 72 (all quotations from the ESV):

And he called to him his twelve disciples and gave them authority over unclean spirits, to cast them out, and to heal every disease and every affliction. The names of the twelve apostles are these…. These twelve Jesus sent out, instructing them, “Go nowhere among the Gentiles and enter no town of the Samaritans, but go rather to the lost sheep of the house of Israel. And proclaim as you go, saying, ‘The kingdom of heaven is at hand.’ Heal the sick, raise the dead, cleanse lepers, cast out demons” (Matt. 10:1-2a, 5-8).

And he went up on the mountain and called to him those whom he desired, and they came to him. And he appointed twelve (whom he also named apostles) so that they might be with him and he might send them out to preach and have authority to cast out demons. He appointed the twelve… (Mark 3:13-16a).

And he called the twelve and began to send them out two by two, and gave them authority over the unclean spirits…. So they went out and proclaimed that people should repent. And they cast out many demons and anointed with oil many who were sick and healed them (Mark 6:7, 12-13).

And he called the twelve together and gave them power and authority over all demons and to cure diseases, and he sent them out to proclaim the kingdom of God and to heal. And they departed and went through the villages, preaching the gospel and healing everywhere (Luke 9:1-2, 6).

After this the Lord appointed seventy-two others and sent them on ahead of him, two by two, into every town and place where he himself was about to go. And he said to them, “The harvest is plentiful, but the laborers are few. Therefore pray earnestly to the Lord of the harvest to send out laborers into his harvest. Go your way; behold, I am sending you out as lambs in the midst of wolves…. Heal the sick in it and say to them, ‘The kingdom of God has come near to you.’” …The seventy-two returned with joy, saying, “Lord, even the demons are subject to us in your name!” And he said to them, “I saw Satan fall like lightning from heaven. Behold, I have given you authority to tread on serpents and scorpions, and over all the power of the enemy, and nothing shall hurt you. Nevertheless, do not rejoice in this, that the spirits are subject to you, but rejoice that your names are written in heaven” (Luke 10:1-3, 9, 17-20).

The 72 appear to have been given the same authority and essentially the same set of instructions as the twelve, and it seems likely that the pool of qualified candidates for apostles in Acts 1:21-26 came specifically from the group of 72. What we see in these texts is that Jesus did not teach that all believers could heal diseases, cast out demons, and raise the dead, but rather commissioned two select groups of disciples and specifically gave them “authority” to perform these miracles “in his name” (i.e., on his authority). It is a mistake to infer from these passages that all believers in Jesus even in the first century, let alone throughout church history, were being told that they could do these things.

Gifts of Healings and Workings of Miracles

Paul mentions “gifts of healings” and “workings of miracles” in his discussion of manifestations of the Spirit in 1 Corinthians:

These two spiritual gifts were special manifestations of the Spirit that some believers had and some did not (as verses 29-30 indicate by way of rhetorical questions). We are not told under what circumstances the individuals who had these “gifts” were enabled to perform healings or other miracles. We are not told directly if they were able to do these things at will. It is somewhat suggestive that Paul uses the personal noun titles apostles, prophets, and teachers but then shifts to abstract or impersonal nouns—miracles, gifts of healings, helps, and so on. For at least some of these terms, personal nouns were available, such as “helper” (ἀντιλήπτωρ) instead of “help” (ἀντίλημψις), or other ways of referring to the person who does these things, such as “the one who heals” (ὁ ἰώμενος, used of God in the Septuagint at Exod. 15:26; Ps. 147:3). This shift in wording may suggest that these manifestations are not necessarily held permanently by specific individuals as an office or calling in the same way as the ministries of apostles, prophets, and teachers. Perhaps these gifts came upon certain individuals at one time or another, or on a few occasions, and maybe not always upon the same individuals. Again, we don’t have concrete information allowing us to be sure, at least as best I can tell.

If we want to see these terms as referring to gifted members of the congregation who possessed permanent endowments for these kinds of manifestations of the Spirit, this still leaves unanswered the question of whether they were able to produce these manifestations at will. In other words, we are not told that there were people with the gift of healing who could heal anyone. If there were such people in the early church, then we would need to broaden the category of persons who were so gifted to include not only apostles and prophets but also persons with gifts of healings. We would also have to decide whether such persons exist in the church today. Frankly, I’m not aware of any such individuals today, while, on the other hand, there have been and are many charlatans who have falsely claimed to be gifted healers. But if any genuinely gifted healers were to show up in the church today, that wouldn’t change my main line of argument significantly. We would still not have any basis for the idea that every Christian should be able to go straight to Christ in prayer for healing.

There is another reason to question the idea that in the early church there were individuals within the various congregations who functioned as gifted healers who regularly performed miracles of healing. If there had been such persons, one would think that James would have instructed the sick to be taken to those gifted healers rather than to the elders of the church (James 5:14-16). In Part 1, I have already explained why James 5 should not be interpreted as teaching that Christians are guaranteed healing in answer to prayer. What is often not noticed is that in James 5 there is no hint of the presence of gifted healers in the congregations to whom the sick were to be taken for healing.

I will reiterate that I am certainly not denying that from the second century to the present there have been instances of believers being healed, having demons cast out of them, or even being raised from the dead. What I am saying is that we have no reason to think from the Gospels that Jesus intended these sorts of miracles to be everyday occurrences throughout the church age. The evidence from the Gospels and from Acts is that the frequent occurrences of these miracles in the first century were authenticating signs of the power and presence of Jesus Christ in the people he had commissioned to speak and act in his name in the foundation and establishment of the Christian church after his resurrection and ascension.