Looking for a Low Christology in the Gospel of John: A Review Article 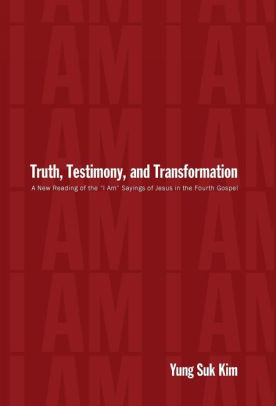 Kim, Yung Suk. Truth, Testimony, and Transformation: A New Reading of the “I Am” Sayings of Jesus in the Fourth Gospel. Eugene, OR: Cascade Books, 2014.

Yung Suk Kim is Associate Professor of New Testament and Early Christianity at Samuel DeWitt Proctor School of Theology, Virginia Union University. He describes himself as a “humanist theologian.” In this short book (the body of which is 78 pages), Kim argues that the Gospel of John should be understood not as teaching exclusivism but inclusivism and empowerment through a “low Christology” in which Jesus was not God incarnate but “the Jewish Messiah” who worked on God’s behalf (ix, 1). Kim’s goal is to explain how John 14:6, in which Jesus says, “I am the way and the truth and the life,” does not mean that Jesus himself is the way but that Jesus was someone who showed us the way. This interpretive maneuver then allows Kim to maintain that the way can be found apart from Jesus, thereby divesting the Christian faith of the “exclusivist” claim John 14:6 has traditionally been understood as expressing.

In order to make such a highly revisionist interpretation of the Gospel of John viable, Kim knows he must counter two traditional elements of the Christian faith. First, Kim must deny that Jesus died on the cross to atone for human sins, since obviously such an idea makes Jesus indispensable for human salvation. Second, he must reject the idea that Jesus is God, which would make him unique among all religious leaders and teachers in history. Kim therefore tries to show that the Gospel of John teaches neither of these ideas. It does not go well.

Regarding Christ’s unique place in our salvation, Kim asserts, “Jesus does not come to die in place of sinners in the way of a vicarious death or in the sense of a penal substitution. Forgiveness occurs through mutual forgiving in the Fourth Gospel: ‘If you forgive anyone’s sins, they are forgiven’ (John 20:23)” (5). In that same verse, however, Jesus continued by saying, “if you withhold forgiveness from any, it is withheld”! In context, Jesus was commissioning the disciples to take the message of forgiveness of sins to the world in the power of the Holy Spirit (vv. 21-22).

Kim admits twice that John mentions Caiaphas speaking of Jesus’ death as vicarious but claims this is not John’s own view. On this point, Kim twice cites John 18:14 (5-6, 55), which briefly recalls Caiaphas’s statement on an earlier occasion. Kim blithely ignores John’s full account and comment on the meaning of Caiaphas’s statement. After John quotes Caiaphas’s statement that “it is better for you to have one man should die for the people than to have the whole nation destroyed,” John comments, “He did not say this on his own, but being high priest that year he prophesied that Jesus was about to die for the nation, and not for the nation only, but to gather into one the dispersed children of God” (John 11:50-52 NRSV).

At this point, frankly, Kim’s handling of the biblical text amounts to theological malpractice. It is difficult to believe that Kim was unaware of the longer, earlier statement to which John 18:14 merely alluded in passing. This blatant misrepresentation by selective citation is typical of the whole book. In addition to ignoring John 11:47-52, Kim fails to address the significance of John the Baptist’s statement in the context of Jewish religion that Jesus was “the Lamb of God who takes away the sin of the world” (John 1:29). That imagery, of course, recalls the lambs of the temple sacrificial system that were killed in sin-offerings on behalf of the people.

Kim’s efforts to extract a “low Christology” from John in which Jesus was simply a man working on behalf of God for the liberation of humanity are similarly flawed. “Jesus never says he is God,” Kim tells his readers (2), as though this argument from silence is at all significant. Instead, according to Kim, Jesus only called himself “the Son of God,” which Kim explains in Jewish idiom meant Israel, the Israelites, or an Israelite leader (1, 3). Is that why his Jewish opponents throughout the Gospel thought Jesus deserved to die—because he claimed to be an Israelite? Clearly not (see John 5:17-18; 8:59; 10:31-33; 19:7).

In order to deny that John presents Jesus as God, Kim attempts to distinguish Jesus from the Logos (“Word”) that John states explicitly was God (John 1:1). Kim argues that Jesus is not the Logos but only embodies or “incarnates” the Logos (2) as do his disciples after him as they follow his example (28-29). In order to make this interpretation work, Kim is forced to claim that the Prologue (John 1:1-18) makes no reference to the person we call Jesus until verse 14. The Logos in his view is not the divine or preincarnate Christ but is the creative and liberating word of God that Jesus lived and proclaimed.

Kim’s interpretation of the Prologue utterly breaks down in John 1:10-13, which talks about the Logos coming into the world and being rejected by most though accepted by some. Kim tries to address this problem in a footnote, claiming, “In 1:10-13 the Greek pronoun ho does not refer to Jesus but to the Logos” (34 n. 67). This is a bizarre statement. First, there is no word in the Greek text of John 1:10-13 that could be transliterated as ho. Second, the Greek word that we would transliterate as ho is not a pronoun; it is a form of the article (which we would translate “the”). There are Greek pronouns in the passage, which we would transliterate as autou and auton. In context, these pronouns refer to a person who “came to his own, and his own people did not accept him” (v. 11 ESV), while those who did accept him and “who believed in his name” were given authority to become God’s children (v. 12). That person, of course, must be Jesus Christ. This is an embarrassing display of exegetical ineptness for someone who occupies the position of professor of New Testament.

Kim’s handling of the “I am” sayings of Jesus in John, which is the main subject of his book (especially the saying in John 14:6), amounts to little more than special pleading. For example, when Jesus is quoted as saying, “I am the light of the world” (John 8:12), for Kim this cannot be allowed to mean that Jesus “is the light” or even that he reveals the light (which would be an exclusive claim). It therefore must mean that “Jesus’ work is the light” (32–33). But Kim overlooks the contrast that John makes in his Prologue between John the Baptist, who “was not the light, but came to bear witness about the light” (1:8), and Jesus Christ, who “was the true light…coming into the world” (1:9). By Kim’s standard, John the Baptist could have said the words of John 8:12 about himself since John was also doing the work of the light.

According to Kim, Jesus’ statement, “Before Abraham came to be, I am” (8:58), does not mean that Jesus preexisted Abraham but that “all are included in the love of God” (32). Read his discussion of the passage for yourself if you like and see if you think he makes a plausible case for that interpretation. If John 8:58 can be finessed away in such a manner, reinterpreting John 14:6 as affirming a path of personal transformation that Jesus only exemplified is easy (see chapter 5, 47-55).

The reader of this review may be wondering how Kim squares his low Christology with Thomas’s climactic confession when he saw the risen Jesus and said to him, “My Lord and my God!” (John 20:28). I wonder the same thing. Kim never so much as mentions John 20:28 anywhere in the book.

Ultimately, this book is driven by an ideological agenda. According to Kim, a high Christology that identifies Jesus as God is unacceptable because it supposedly engenders an “imperial, colonial” ideology in which “the Logos becomes a weapon that rejects all other forms of values, religions, and cultures” (71). Kim’s mistake here is in presupposing that a high Christology privileges some particular culture or group over others. To the contrary, the doctrine that Jesus Christ is the divine Logos incarnate exalts him as the source of light to all cultures and as a challenge to the darkness in all cultures, including those that profess to be keepers of the light.

For a shorter version of this review, please see my review of Kim’s book on Amazon.

Visit the Website
This entry was posted in Biblical Studies, Jesus and Christology and tagged Christology, deity of Christ, Gospel of John, I am, John 1:1-18, John 8:58. Bookmark the permalink.

3 Responses to Looking for a Low Christology in the Gospel of John: A Review Article