Jesus the Divine Bridegroom: Michael Tait’s Case for a High Christology in Mark 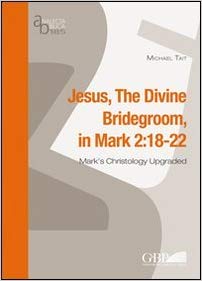 Michael Tait is a former schoolteacher and headmaster with two doctorates who sought but never entered the Catholic priesthood, instead becoming an accomplished biblical scholar. The present book is the published version of the dissertation for his second doctoral degree (Ph.D., University of Manchester, 2008).

In this densely packed and carefully reasoned book, Tait argues that Jesus’ reference to himself as “the bridegroom” in Mark 2:19-20 reflects a divine Christology in Mark every bit as “high” as what we find “in John, Paul or Hebrews” (17). In response to the question why Jesus’ disciples were not fasting, Jesus replied:

First, in chapters 1–3 he argues that in the surrounding context of the passage, Mark presents Jesus in ways that implicitly attribute divine powers or prerogatives to him (16–134). Thus, Jesus forgives sins, even seeking out sinners, and miraculously heals people as demonstrations of his divine authority to do so (Mark 2:1–3:6). In general, I agree with the point Tait is making here, but some elements of his argument are open to question. In particular, I found his attempt to show that a second “controversy collection” later in the Gospel (Mark 11:27–12:35) exhibits a theological structure parallel to Mark 2:1–3:6 unpersuasive and a bit of a distraction (79–90, 119–33).

Second, in chapters 4–6 Tait shows that throughout the Old Testament as well as in some Jewish literature closer to the time of Jesus, Yahweh (the LORD) describes himself as the husband or bridegroom and Israel or Judah as his bride or wife (135–225). Crucial passages in the Old Testament include Hosea 2, Jeremiah 3 and 31, and several passages in Isaiah 50–62. In all of the Old Testament prophets who use this marital metaphor, “It is always God who is the Bridegroom” (Tait, 166). The main point Tait seeks to make in these chapters is that there was no Jewish tradition in which the Messiah or other intermediate figure was pictured as the Bridegroom of his people; that imagery always applied to God. The language is typically eschatological, i.e., it points forward to a future time when the Jewish people’s relationship with Yahweh will be restored.

One text that might seem at least a partial exception with regard to the Old Testament’s use of the bridegroom motif is Psalm 45, a royal psalm about the Jewish king’s marriage, which is quoted in Hebrews 1:8-9 and applied to Jesus as the Son. Tait gives substantial attention to this text (181–200). The main controversy with regard to Psalm 45:6-7 is whether the title “God” is there being applied to the Davidic king and if so what meaning it has in context. Tait’s treatment of the text is in some ways very helpful, in other ways somewhat muddled. In the end, it seems that Psalm 45 is a partial exception to Tait’s claim that the bridegroom motif is never applied metaphorically to a Messianic figure.

Third, in chapter 7 Tait surveys New Testament references to the bridegroom (227–82). He shows that in various parts of the New Testament other than the passage in Mark 2:19-20 and its parallels—in the Gospels, Paul’s epistles, and the Book of Revelation—it is Jesus Christ who is portrayed as the bridegroom and the church as his bride or wife (Matt. 22:1-14; 25:1-13; John 3:28-30; Rom. 7:4; 1 Cor. 6:16; 2 Cor. 11:2; Eph. 5:22-33; Rev. 19:1-6; 21:8-22:5, 17). “In all our texts, Jesus replaces Yahweh as the Bridegroom of the prophetic/eschatological tradition” (281–82). This stage of Tait’s argument is especially strong. Wherever the bridegroom motif appears in the New Testament, it is always in language that recalls the Old Testament motif of Yahweh as the bridegroom or husband of his people. In this connection, we should note that Hebrews 1 does not pick up any of the marital imagery from Psalm 45 when applying Psalm 45:6-7 to Jesus.

Finally, in chapter 8 Tait offers a detailed exegesis of Mark 2:18-22, with the focus on verses 19-20 in which Jesus speaks about the bridegroom (283–325). Tait argues that Jesus’ reference to the bridegroom and his attendants is not a general metaphor for joy (as argued, for example, by Joachim Jeremias and C. H. Dodd), but picks up very specifically on the Old Testament metaphor of the bridegroom as representing God seeking in the future to be united permanently with his people. The bridegroom in Jesus’ sayings here is a reference to himself and the attendants are Jesus’ close disciples. “He is the eschatological Bridegroom and they his intimate friends” (314). In speaking indirectly about himself in this way, Jesus was making an implicit claim to deity, “veiled,” as are Jesus’ other claims in Mark’s Gospel, in the “enigmatic” language of parable. Thus, even though Mark does not explicitly speak of Jesus as God and man, his Gospel presents Jesus as a paradoxical figure—both divine Son and humble Servant—that might fairly be viewed as contributing to the later theology of Christ’s divine and human natures (314, 327–28). Tait concludes that Jesus “is not identified with Yahweh tout simple” in Mark since Jesus is clearly distinguished from God the Father, and yet Jesus appears “on a higher plane than any of the other intermediaries previously envisaged in Jewish tradition” (330). This paradoxical Christology anticipates in an incipient manner the Trinitarian view of Christ.

Michael Tait has made a worthy contribution to the study of Markan Christology. Despite a couple of questionable rabbit trails, the book puts another nail in the coffin of the evolutionary view of Christology that hypothesizes a gradual development within the New Testament from a merely human Jesus to the explicitly divine Jesus of Christian orthodoxy. Instead, Tait’s book demonstrates that indications of the deity of Christ are found throughout the New Testament, including in such surprising places as an answer by Jesus in Mark to the question of why his disciples were not fasting.

Visit the Website
This entry was posted in Biblical Studies, Jesus and Christology and tagged Christology, deity of Christ, Gospel of Mark, Jesus. Bookmark the permalink.

2 Responses to Jesus the Divine Bridegroom: Michael Tait’s Case for a High Christology in Mark